Professional Physical Medicine and Rehabilitation Services in Alabama
Our team is here to identify the cause of your pain and develop a treatment plan that suits your schedule, your goals, and your life.

From pain management to interventional medicine, Restoration Health is your trusted healthcare partner for advanced healing and improved quality of life.

An epidural injection delivers steroids into the epidural space around spinal nerve roots to relieve pain – back pain, leg pain, or other pain – caused by irritated spinal nerves. The steroid used in the epidural steroid injection reduces the inflammation of those nerves, which is often the source of the pain. Spinal nerves can become inflamed due to irritation from a damaged disc or from contact with a bone spur. These injections are not a cure for back pain or leg pain; rather, to help patients get enough pain relief in order to be able to progress with their rehabilitation program.

With ultrasound and image-guided therapy, surgeons can see and operate within the body. This surgical technique is possible because the surgeon navigates by advanced three-dimensional maps that show him the way around the inside of the body. 3D ultrasonic images enable the surgeon to see changes in the tissue during the operation itself. This medical technology can be employed in various parts of the body, for example, to remove tumors in the brain or in the stomach or identify the precise location of an injection for pain control. It improves patient treatment by avoiding large surgical scars, removing more of the problem area, improving accuracy and precision of treatment area, reducing the risk of complications, and shortening convalescence.

An EEG (electroencephalogram) and an EMG (electromyogram), help physicians understand the nervous system. An EEG records the electrical waves of the brain. An EMG evaluates nerve and muscle function in the arms or legs that may reflect what is happening in the brain, neck, or back.

An EEG is used in the evaluation of various suspected brain disorders; seizures, stroke, transient Ischemic attack (TIA or “mini-stroke”), and syncope (fainting) are some of the most common reasons to have an EEG. The testing is performed by a technologist and involves pasting electrodes to the surface of the head that will record the brain waves at rest and during certain activities.

A physician performs an EMG by inserting sterile pins with a microscopic electrode on the tip into certain muscles of the patient’s limbs or back. The test can be helpful in evaluating the causes of numbness, tingling, pain, weakness, fatigue and muscle cramping.

Radiofrequency ablation (or RFA) is a procedure used to reduce pain. An electrical current produced by a radio wave is used to heat up a small area of nerve tissue, thereby decreasing pain signals from that specific area. RFA can be used to help patients with chronic (long-lasting) low-back and neck pain and pain related to the degeneration of joints from arthritis. The degree of pain relief varies, depending on the cause and location of the pain, but relief can last from six to 12 months and even longer.

The cooled radiofrequency treatment is an advanced procedure that uses cooled radiofrequency energy to safely target the sensory nerves responsible for sending pain signals. A radiofrequency generator transmits a small current of RF energy through an insulated electrode, or probe, placed within the tissue. Ionic heating, produced by the friction of charged molecules, thermally deactivates the nerves responsible for sending pain signals to the brain. RF energy heats and cools the tissue at the site of pain. Unlike other RF procedures, the cooled radiofrequency treatment circulates water through the device while heating nervous tissue to create a larger treatment area, increasing the opportunity to help with pain. This combination targets the pain-transmitting nerves without excessive heating, leading to pain relief.

Synvisc is similar to the fluid that surrounds the joints in your body. This fluid acts as a lubricant and shock absorber for the joints. Synvisc is used specifically to treat knee pain caused by osteoarthritis. It is usually given after other arthritis medications have been tried without successful treatment of symptoms. It is injected directly into the knee joint.

Platelet-rich plasma, commonly referred to as “PRP”, is a non-operative, permanent solution for conditions such as arthritis and ligament/tendon sprains and tears. Utilizing the body’s natural healing process, PRP therapy is a concentration of platelets that are injected into the damaged ligaments, tendons, and joints to promote tissue repair and accelerate healing. Platelets are rich in growth and healing factors which means, on average, an injured individual can get back to a pain-free life in four to six weeks.

A trigger point injection can help soothe muscle pain, especially in your arms, legs, lower back, and neck. It also can be used to treat fibromyalgia, tension headaches, and myofascial pain.

Trigger points are painful “knots” in your muscles. They form when a muscle can’t relax. Sometimes you can feel these knots when you rub your muscle.

You can have several trigger points injected during one visit to your doctor’s office. The procedure only takes a few minutes.

Trigger point injection may be right for you if your muscle pain has not improved with other treatments, including pain medication and physical therapy.

Botox is used medically to treat certain muscular conditions, and manage pain, however, it is most commonly known for its cosmetic application in temporarily paralyzing muscles to remove wrinkles. It is made from a neurotoxin called botulinum toxin that is produced by the bacterium Clostridium botulinum. It acts as a temporary paralytic and can be effective in the treatment of migraines, muscular disorders, and some bladder and bowel disorders. Botox is administered by diluting the powder in saline and injecting it directly into neuromuscular tissue.

A medial branch nerve block is a procedure in which an anesthetic is injected near small medial nerves connected to a specific facet joint. Typically several levels of the spine are injected in one procedure.

If the patient experiences marked pain relief immediately after the injection, then the facet joint is determined to be the source of the patient’s pain.

The procedure is primarily diagnostic, meaning that if the patient has the appropriate duration of pain relief after the medial branch nerve block, then he or she may be a candidate for a subsequent procedure – called a medial branch radiofrequency neurotomy (or ablation) – for long term pain relief.

Facet joints are small joints at each segment of the spine that provide stability and help guide motion. The facet joints can become painful due to arthritis of the spine, a back injury, or mechanical stress to the back. Both facet joint injections and medial branch blocks are used to diagnose and treat pain stemming from facet joints. While treating pain, typically steroids or steroids mixed with anesthetics are used.

The mechanism of pain control is different for facet joint injections and medial branch blocks.

A cervical, thoracic or lumbar facet joint injection involves injecting a small amount of local anesthetic (numbing agent) and/or steroid medication, which can anesthetize the facet joints and block the pain. The pain relief from a facet joint injection is intended to help a patient better tolerate a physical therapy routine to rehabilitate his or her injury or back condition.

Facet joint injections usually have two goals: to help diagnose the cause and location of pain and also to provide pain relief:

The injection procedure may also be called a facet block, as its purpose is to block the pain.

The sacroiliac joint typically has little motion. Small movements at the joint help with shock absorption and forward/backward bending. The joint is reinforced by strong ligaments surrounding it, some of which extend across the joint in the back of the pelvis. This network of soft tissues provides support, limits movement at the joint, and assists with absorbing pressure.

Other muscles that support sacroiliac joint function include the gluteus maximus and the piriformis muscle.

Although blood is mainly a liquid (called plasma), it also contains small solid components (red cells, white cells, and platelets.) The platelets are best known for their importance in clotting blood. However, platelets also contain hundreds of proteins called growth factors which are very important in the healing of injuries.

To develop a PRP preparation, blood must first be drawn from a patient. The platelets are separated from other blood cells and their concentration is increased during a process called centrifugation. Then the increased concentration of platelets is combined with the remaining blood.

To speed healing, the injury site is treated with the PRP preparation. This can be done in one of two ways:

PRP can be carefully injected into the injured area. A mixture of PRP and local anesthetic can be injected directly into this inflamed tissue. Afterwards, the pain at the area of injection may actually increase for the first week or two, and it may be several weeks before the patient feels a beneficial effect.

PRP may also be used to improve healing after surgery for some injuries. For example, an athlete with a completely torn heel cord may require surgery to repair the tendon. Healing of the torn tendon can possibly be improved by treating the injured area with PRP during surgery. This is done by preparing the PRP in a special way that allows it to actually be stitched into torn tissues.

Joint injections are used to deliver steroids directly into a joint, such as a knee, ankle, hip or wrist. Sometimes fluid is removed from the joint before the steroid is injected.

Steroid joint injections can help with pain and swelling by treating the underlying joint inflammation – improvement is often with a several days.

Joint injections are performed in an office or hospital setting, often with a cold spray or other local anesthesia. After the skin surface is thoroughly cleaned, a needle in injected directly into a joint. At this point steroids can be injected into the joint. The steroid treats the inflammation inside the joint, leading to decreased swelling and pain.

Commonly injected joints include the knee, shoulder, ankle, elbow, wrist, base of the thumb, and small joints of the hands and feet. Hip joint injection may require the aid of an ultrasound or X-ray called fluoroscopy for guidance. Some small joints may also be more easily aspirated or injected with aid of ultrasound.

Osteoarthritis of the knee is one of the leading causes of disability in the United States. It develops slowly and the pain it causes worsens over time. Although there is no cure for osteoarthritis, there are many treatment options available to help people manage pain and stay active.

In this procedure, a gel-like fluid called hyaluronic acid is injected into the knee joint. Hyaluronic acid is a naturally occurring substance found in the synovial fluid surrounding joints. It acts as a lubricant to enable bones to move smoothly over each other and as a shock absorber for joint loads. People with osteoarthritis have a lower-than-normal concentration of hyaluronic acid in their joints. The theory is that adding hyaluronic acid to the arthritic joint will facilitate movement and reduce pain. 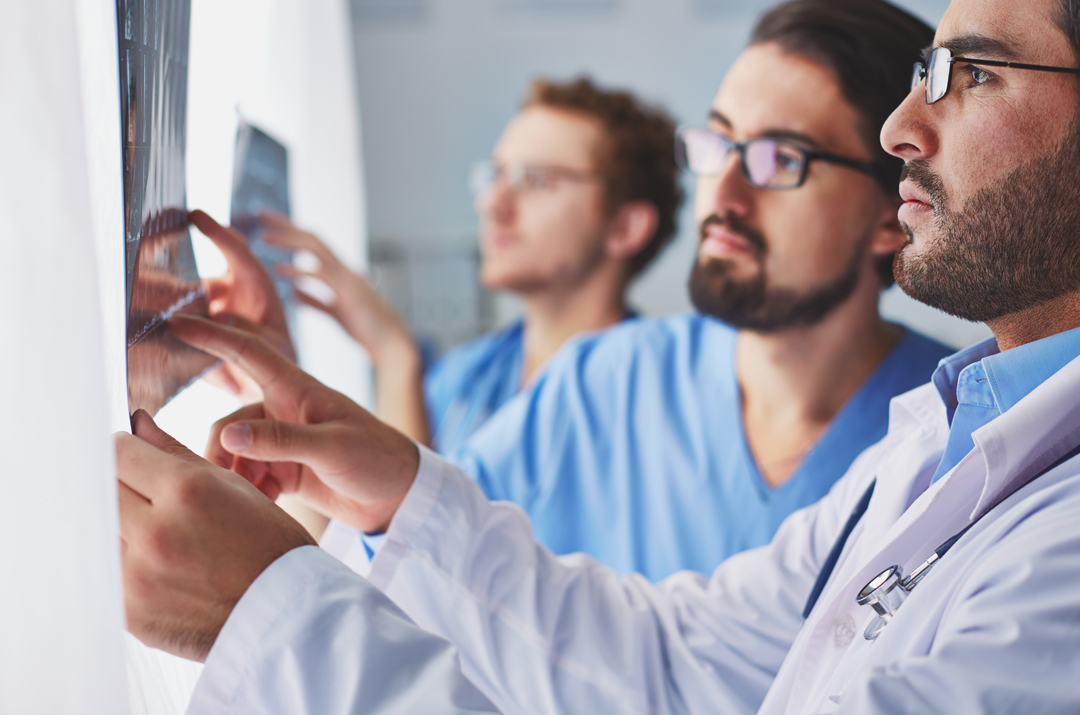 Physical medicine and rehabilitation (PM&R), also known as physiatry or rehabilitation medicine, aims to enhance and restore functional ability and quality of life to those with physical impairments or disabilities affecting the brain, spinal cord, nerves, bones, joints, ligaments, muscles, and tendons. A physician having completed training in this field is referred to as a physiatrist. Unlike other medical specialties that focus on a medical “cure,” the goals of the physiatrist are to maximize patients’ independence in activities of daily living and improve quality of life.